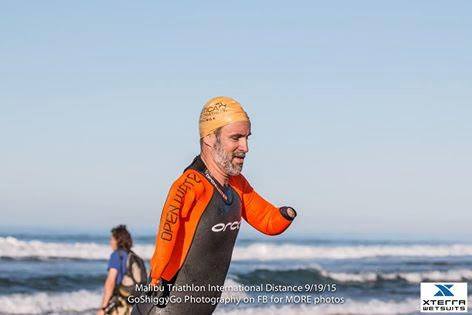 Friends and family members often ask me what I go through during a race. What’s it like? What am I thinking? What kind of obstacles do I typically face? So I decided to take notes after the Nautica Malibu Triathlon this past September.

Nautica Malibu Triathlon was a race I was looking forward to for a long time. It’s in California, in the beautiful beach community of Malibu. This race attracts many highly competitive athletes. And I wanted to use it as a practice triathlon before the IRONMAN in Kona.

I got to the race venue feeling energized and ready to go. Unfortunately, as I was setting my bike up on the rack, I noticed that my rear derailer, which is part of the bike gears, wasn’t shifting.

I ended up taking my bike to the on-site mechanic. He was unable to fix it, but he did get the bike to manually lock into a single comfortable gear. At this point, I was anticipating a challenging day of riding using one gear, but I focused on doing what I had to do: get ready to race.

The 1.5-kilometer swim was in the picturesque and clear waters of the Pacific Ocean. The water temperature was 68 degrees, making wearing a swim wetsuit legal. I started in group 5 of the competitors and the breaking waves made reaching the first buoy tough. But once I turned the corner, it was pretty smooth. For some reason, the swimming portion of this triathlon felt longer than advertised, but I wasn’t able to confirm that for a fact. So other than being kicked in the head several times, it was a comfortable, yet slow swim for me at 38 minutes.

As I was running out of the water towards my bike, I couldn’t help but think about how the inability to shift would affect my race time. I grabbed my bike and headed out to a loud cheer from the spectators. This gave me the boost that I needed. I was able to conquer the 25 hilly miles in a 20-mph pace just using my front gear.

It was a spectacular 25 miles on the historic Pacific Coast Highway. Even though I was pushing hard and probably weakening my legs, I did enjoy the entire 1 hour and 14 minutes of the ride.

As I headed into the run, which is 6.2 miles, people cheered loudly and it gave me another boost. The spectators at this race are so supportive and it meant a lot. At this point, I realized it was becoming a hot day. We ran south encountering a couple of small hills and alongside the path adjacent to the beach. My legs had definitely been affected by the swim and bike ride. Pedaling in one gear took a toll on me.

The last leg of any triathlon can be grueling. This is the time in triathlons when I typically do a “gut check” and keep pushing forward. This is also the time where the hard work pays off. It isn’t just the fact that I’m closer to the finish line but it is when I truly feel the love and respect from my fellow athletes.

I typically get a lot of “Go Hector — you’re an inspiration” and one large man even got teary eyed. I love this sport and I enjoyed the moment when I crossed the finish line after 3 hours and 13 minutes.

Thank you Novation Settlement Solutions for your sponsorship and for the opportunity to compete in the Nautica Malibu Triathlon. You’ve given me a way to inspire new people. Congratulations to event organizers, staff, volunteers and participants for providing a great race experience and for raising more than $1.3 million for Children’s Hospital Los Angeles. Thanks to my family, friends and followers for your continued support. I couldn’t do it without you. Ironman Hawaii, you are mine!